Hiphop people really care about their style! and a big part of that style is THE SHOES…that’s why there is this whole sneakers freak attitude in our culture.
While most of the community check for new models, bboys really stick to the classics models.
Some models are timeless while others are just a trend that last some months or a few years.

created in 1972, this model is the first one made by Nike. Soon after they created this model, they started from one athletics track to another in a van to promote Nike’s products as the brand’s main salesman It become famous after the Olympics Game in Munich were the american athletes started wearing the shoes. This shoes were soon on the kids feet in the bronx at the birth of Hiphop.
The Nike Cortez are really light, it’s really good for powermove. Nowadays it’s a bit rare to see them on bboys feet. The difficulty of the moves and the more and more dangerous style that some of the bboys do today might be dangerous for their ankles with such a model.

created in 1969, this model became iconic in both basketball and hiphop. Kareem Abdul-Jabbar was the first NBA player to wear it and gethoo kids who were influence by basketball started have it on their feet playing in the street. When Run-DMC decided that they would dress on stage the way they dressed in the streets with their Superstar sneakers with the tongues pushed out and laces undone, that created a hip-hop fashion that remains popular today. with their song “my adidas”, they promoted the shoe as they went on tours across the US, popularizing it outside of basketball culture.
Bboys directly adopted this shoes that is timeless. I think it’s the most used today with the Puma Suede. For me it’s the Ultimate bboy shoe!

created in 1968, the newly released Puma Suede was worn by Tommie Smith, the prominent Olympic athlete that took to the Olympic awards podium with one fist held defiantly in the air as a black panter salute. Some years after, Walt “Clyde” Frazier wore this style in the 1980′s and this shoe became known as the “Clyde”. The Suede is widely regarded as the original B-Boy shoe. It was made famous by early bboy crews, such as the New York City Breakers and the Rock Steady Crew, who rocked them religiously as the superstars at early Hip-Hop jams in New York City.
This model is light enough to be used by powermover because it’s light enough but also gives you the perfect style for footwork with beeing scared to twist your ankle or injured your feet.

created in 1969, The brand Pro Keds introduced to the world the “PRO-Keds Super,” which was also known as the 69er. To some people growing up in Harlem and the Bronx, the 69er was also referred to as the “Uptowns”.Again as the other brands, it was popularised by the New York Knicks basketball players wearing and endorsing the product on court, the brand also gained street credibility when they were seen on the feet of Hip-Hop pioneers DJ Kool Herc, Afrika Bambaata, and the Rock Steady Crew amongst several others. With both its on court and street visibility, 69er quickly became the first classic sneaker for New Yorkers. Pro Keds really focused on the rubber of the gum which was quite hard but also elastic. This gum gave the ultmate boioing swag when you walk which gave the bboy a perfect shoes to dance.
In the early 1970s, PRO-Keds introduced the Royal Master, also known as the Royal Plus. It became one of the most well known basketball models. Some of the game’s most exciting players including Pete Maravich, Tiny Archibald, and Jo Jo White endorsed this shoe. In addition to PRO-Keds hardtop significance, its popularity on the streets continued as members of NYC’s elitle B-boy community adopted it as a key break dancing shoe.
The Pro keds were popular in the early years of hiphop and disapear after….it made a big comeback in the bboy community in 2005/6. This shoes lost his soul when they associate with Roca wear and made some shinny pink plastic models…they also changed the gum which was the secret power of the shoes to a normal one.

Introduced in 1968 as a training/soccer shoe, the Gazelle is one of the most popular adidas models ever. Adidas brand is the number one brand for the Bboys and it’s no surprise there are many models in the classic bboy shoes. The Gazelle has been released in hundreds of colour variations over the years in its usual suede material. This model is also a bboy classic, that was used back in the days and that will be use in the future. This model is like the Puma Clyde, a perfect mix between light and strong gum shoe that is comfortable whatever style you do. You can see them on the feet of the homeboy on the right of the picture 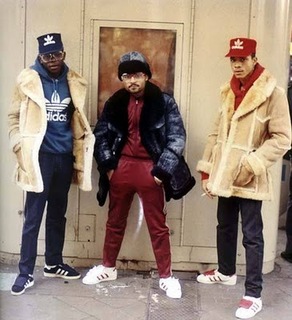 created in 1983, ths shoes became really popular in the UK, when i started to dance a lot of bboys used them to break. This running shoes is one of the few not to have a flat gum, now it’s really rare to see some bboys wearing them. created in 1917, this model got famous with (again) Basketball players that used them such as Charles “Chuck” Taylor.  The bboys didn’t really use them because the gum of this model is really thin. In the bboy scene, bboys start wearing them when Pro keds made their come back in 2005, Maybe due to the poor quality of internet and the pixelisation of the video, when bboys tarted to use the Royal Hi canveas pro keds, people watching internet clips thought it was Chucks allstars due to the similarity. So more and more bboys started using them even if the thin gum hurt your knee and your feet. The Chucks also became popular when bboys that are trying the LosAngeles TVdance life starting using them.
This shoe is a killer for your body, the thin gum makes you light but doesn’t allow you to have good balance depending you the moves.